From the inside of the feet, you can see a clear arc, which is the arch of the foot. The arch of the foot helps people absorb shocks when walking and avoid excessive pressure on their feet. The “flat feet” we often hear are those with too low or no arches. In other words, people without medial longitudinal arches are called flat feet.

What are flat feet?

The structure of the arch of the foot can be said to be a natural shock absorber. The normal arch of the foot is composed of bones and joints, and the plantar fascia is like a “string”, bearing the weight in a direction similar to the “inverted buckle”. When the pressure of the weight comes, it can spread to the two ends of the arch (the front end of the metatarsal bones and the heel), and the plantar fascia maintains the elasticity and contraction of the arch.

However, flat feet have no cushioning space because the entire sole is attached to the ground and there is no raised arch. If the flat feet are mild, there may be no symptoms or discomfort in daily life. If the condition is more serious, walking or exercising for a long time may cause pain in the feet.

Incorrect walking posture: If the walking posture is not correct, it will easily cause the inner thigh internal trochanter and calf muscles to relax, which will increase the burden on the heel and knee joints, which will not only cause knee arthritis but also depress the arch of the foot.

In addition, the muscles of the thighs will also pull the pelvis backward due to tightness. This will make our weight stand on the heels, and the toes will naturally float to the ground, and the arch of the foot will not be able to properly absorb the shock.

Serious lack of exercise: In addition to causing the above three muscles to accumulate metabolic waste and tighten into a ball, it also makes our legs tremble constantly when standing, so that the soles of the feet will be more stable to stand. Larger area to flatten the ground.

Loss of aging muscle strength: If you walk every day, it is normal to be at least 80 years old before the lower body muscle strength will degenerate to the point where the arch of the foot may collapse. However, the development of modern vehicles also makes the population of flat feet grow even more. fast.

Flat feet are divided into two types: softness and stiffness. The former is due to the loose ligaments, and the arch of the foot can be seen at ordinary times. Once the feet are on the ground, they will become flat feet. Such patients can be treated with corrective insoles. As for rigid flat feet, it may be congenital or caused by disease or trauma. Both conditions require medical treatment to avoid further deterioration.

On the other hand, some opinions divide flat feet into congenital and acquired. Congenital flat feet may be caused by natural ligament laxity or familial inheritance.

In addition, if the baby wears shoes too early, the sole stimulation is reduced and the arch of the foot cannot be formed. Studies have also found that children who grow up in rural areas are less likely to have flat feet; this may be because urban parents put their children on shoes too early, which instead caused the arches to collapse.

Long-term wrong walking posture, overweight, and muscle weakness can also cause it. There is also a habit of standing for long periods, walking through high heels, overwork, and going up and downstairs. These are also high-risk groups with hidden flat feet.

Due to the lack of arches to relieve the impact of the ground, flat feet not only hinder normal walking posture but also make it difficult to run quickly after walking. Knee pain and low back pain are also accompanied by various lifestyle diseases such as obesity.

1. Ensure enough wearing time
You should wear it for 1-2 hours a day in the beginning and gradually transition to 7-8 hours. How long can the orthotic insole be effective? It varies from person to person. Since adult bones have stopped developing, they need to be worn for a long time to correct the gait that tends to normal arches and straight legs. In addition to reducing the problem, it can also reduce injuries or sports injuries caused by incorrect force. If it is a child, the bones are in the developmental period, you need to check the foot condition regularly, and re-order the orthotic insole according to the actual situation until the flat feet are corrected.

2. Replace appropriately according to the situation
When the size of children’s shoes is increased, new orthotic insole should be replaced in time. Generally speaking, “replacement of insoles every six months is more appropriate.” Generally, the size of adults does not change. If it is a heavy exercise user and uses it frequently, it will take about 6-8 months. Need to replace a new pair of orthotic insole to ensure the best use. In the case of general exercise, adults-only need to change a pair of orthotic insole in about 1-2 years.

3. Correct understanding of “discomfort”
There are two reasons for “discomfort”. One is improper wearing. Before changing to orthotic insole, you should remove the old insoles, otherwise, they will feel too tight. If you still feel too tight after taking it off, consider using shoes that are one size larger. The second is physiological “discomfort”. Most people feel “uncomfortable” when they first wear the insole. This is because the orthotic insole is caused by muscle adjustment in the process of reorganizing the foot structure. When the body adapts, this discomfort will decrease or even disappear. 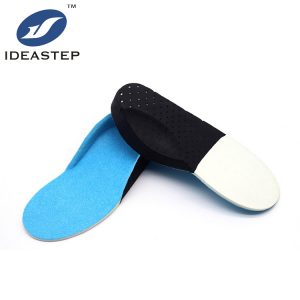