Why Are Orthotics So Important in Diabetic Foot Care?

The foot of a diabetic patient is delicate and vulnerable to a variety of alterations, some of which might result in serious consequences. “Diabetic Foot” is the umbrella name for various changes in foot health. Infections and ulcerations, as well as severe and irreparable nerve loss, can all be symptoms of diabetic foot. That’s why diabetics need to wear suitable orthotics to preserve their feet. This article will delve deeper into the diabetic foot and how orthotic support can help patients avoid serious foot problems.

Diabetes has far-reaching consequences; to suggest this is an understatement. The foot is one of the most vulnerable body parts to the effects of diabetes, to the point where doctors warn patients about the dangers of uncontrolled blood sugar. But what conditions are included under the diabetic foot umbrella? 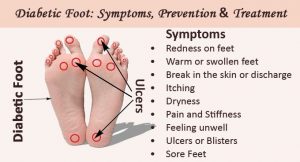 Diabetic Foot Syndrome is a group of ailments that affects diabetics’ feet.

Diabetic neuropathy is a condition in which high blood sugar destroys nerves, especially when it is uncontrolled, resulting in unpleasant feelings in the legs and feet. Diabetic neuropathy is what this is. Pain, “pins and needles,” tingling, and the inverse – a lack of sensation – are all examples of sensations. The latter is risky because a cut that isn’t felt can become infected and spread if it isn’t treated.

Diabetes also affects blood flow by lowering the amount of blood that reaches the tissues of the foot. As a result, wound healing is delayed, as wounds and sores require adequate blood flow to heal quickly. In severe situations, a lack of blood flow can render diabetics with sores vulnerable to gangrene, which is tissue death caused by a lack of blood.

Diabetics can also develop Athlete’s foot, dry skin, blisters, bunions, and other foot problems that affect the general population. Diabetics, on the other hand, may experience more severe cases of these illnesses as well as additional consequences.

Remember that diabetes slows wound healing and high blood sugar weakens the immune system, making even small infections more dangerous. Diabetic foot problems can even go unreported because they can strike without warning.

Inflammation of the foot or ankle

An odor on your feet that won’t go away

Cracks in the skin that are dry (especially around the heel)

If you detect any of these symptoms, or a combination of them, or if they persist, you should consult your doctor right away.

Untreated diabetic foot, like most diabetes problems, can get worse. This isn’t a foregone conclusion for some patients, but it is a distinct potential. Unfortunately, diabetic foot issues can be relentless and severe enough to result in lifelong damage. As a result, it’s critical to treat diabetic foot as soon as possible.

Infections of the skin and bones – A tiny cut or wound in a diabetic patient might become infected. These infections can spread to other areas of the skin or, even worse, to the bones. This necessitates antibiotic therapy.

Abscess – An abscess is a pus-filled pocket that forms when an infection chews into bone or tissue. The abscess must be drained, and in extreme cases, the bone must be removed. However, instead of bone removal, oxygen therapy is currently employed.

Gangrene, or tissue death as a result of insufficient blood flow, is a terrifying complication of diabetic foot. To avoid additional illness, amputation, or death, patients must be treated right away with oxygen therapy or surgical removal.

Deformities – Nerve damage, which is frequent in diabetic patients, can weaken foot muscles, resulting in hammer toes and even high arches.

Diabetics may encounter changes in their foot bone due to higher fracture risks and lack of sensation due to nerve damage. They may walk on damaged bones without realizing it, resulting in Charcot foot, a deformity.

Amputation – Infections that do not clear up or tissue death (gangrene) that does not cure and spreads may necessitate amputation. When all other options have failed, it’s the most effective treatment.

It goes without saying that dealing with the repercussions of an untreated diabetic foot isn’t easy. They can be excruciatingly painful, terrifying, and tragic. Fortunately, these consequences are uncommon when properly treated and lifestyle changes are made. Diabetic orthotics are essential for preventing and minimizing the impact that high blood sugar has on your feet.

How Can Diabetic Orthotics Help You Save Your Feet?

Diabetic orthotics are similar to other forms of orthotic solutions in that they maintain diabetics’ feet healthy, but with a few minor variances. Diabetic orthotics and diabetic footwear are designed to redistribute pressure throughout your feet’s soles. This relieves high pressure, friction, and shear, all of which can cause and exacerbate the issues listed above. These orthotics are often soft and full-length (both length and width) to support and protect the entire foot from harm.

The finest diabetic footwear, also known as diabetic shoes, should relieve pressure from the bottom front of the foot, which is where ulcers commonly occur. It should also aid in the promotion of good circulation, the prevention of skin breakdown, and the prevention of calluses. This backs up the old adage that “prevention is better than treatment.”

In order to maintain the feet safe and healthy, diabetic footwear should follow particular shapes and structures.

Toe boxes should be long, deep, and wide enough to accommodate the toes. A larger, broader toe box guarantees that the toes are not subjected to excessive pressure.

Adjustable lace, straps, or velcro should be included in diabetic footwear. This allows patients to properly fasten their shoes in order to keep their feet secure.

To relieve strain on the metatarsal bones, shoe linings should be no more than 5cm thick (which are at risk of injury and ulceration)

Diabetic footwear should have a smooth inner lining.

Of course, not everyone with diabetes will experience the same symptoms or have the same worries, so your podiatrist will have to provide recommendations that are specific to you. Nonetheless, the majority of patients are subject to these requirements.

We supply a range of diabetic orthotics and footwear that meet these standards at IDEASTEP Orthotics.

Reminders on Diabetes and Foot Care in General

Living with diabetes can be difficult, but it doesn’t have to hold you back if you put up a little effort. Observation is an important “component” for diabetic foot. Make it a habit to inspect the quality of your footwear on a regular basis. Consult your podiatrist or replace your shoes if you experience pressure, discomfort, or a lack of room.

Check your feet on a daily basis to see if they have changed in appearance, color, or texture. Even minor symptoms such as redness, blisters, or peeling skin could be early warning indications of diabetic foot, requiring immediate attention.

These tests can help you stay on top of your foot problems and evaluate whether you require diabetic orthotics. Don’t forget to monitor your blood sugar levels, eat a nutritious diet, exercise regularly, and take your medications as directed by your doctor. Putting in the effort today will help you avoid the long-term repercussions of diabetic foot and other complications.

Do you require diabetic foot orthotics? Get in contact with us if you’re looking for the correct shoes or orthotics.